Oil and dead fish were noticed on a river by a local fisherman, the Environment Agency (EA) investigated and found the source of the oil to be a broken oil supply pipe leading to an oil storage tank located at a large property adjoining the river; it was estimated that up to 2000 litres of oil had escaped from the broken pipe over a period of many months.

In addition to the environmental damage caused to the river, the garden at the property where the oil was located was badly affected by the contamination, causing the lawn and many old established shrubs and trees to die.

Extensive soil & water testing was carried out and a remediation plan was devised by environmental specialists at a cost in excess of £100,000.

The homeowner’s home insurance company refused to pay these costs; the reasons stated were that the loss was of a gradual nature with no evidence of a sudden and accidental identifiable cause and that land and water owned by the policyholder were not covered by their policy. 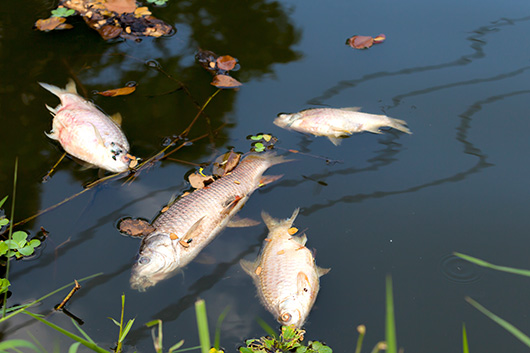 In addition insurers believed that the damage had been greatly exacerbated due to the delay in the incident being reported.

The homeowner was left to raise the money to fund the clean up costs and also the possibility of facing a prosecution by the EA.

An oil leak from underground oil supply pipes in a garden travelled into an ornamental lake sited within the garden and contaminated the water. The contamination was discovered when the homeowner’s horse become very unwell; it had been drinking water from the contaminated lake.

The homeowner arranged for his oil tank installation to be checked for leaks by a local heating engineer and a leak was traced to an oil supply pipeline between an oil storage tank and the swimming pool water heating system in the gardens of the property. The homeowner contacted his home insurers to make a claim for the costs of tracing the leak and making good, the costs of which had run into many thousands of pounds as large areas of terracing around the pool had been dug up to access the leak.

Also, contaminated soil leading to the lake and contaminated water in the lake required removal or treatment. Insurers refused to pay the claim, as although the swimming pool structure was covered by their policy, because of the sloping site the oil had not ‘damaged’ the structure and the policy did not cover the costs of tracing and accessing the leaking oil in the garden.

In addition, the policy did not cover the costs of cleaning up the soil and water as soil/land and water were not included within the definition of property covered under the policy.

Remediation works are ongoing at the property, and are being paid for by the homeowner.

Get a Premium Indication
X
HomeSpill Letter Template
X
Register for HomeSpill
X
Register for WorkSpill
X
Scroll
We use cookies to ensure that we give you the best experience on our website. If you continue to use this site we will assume that you are happy with it.AcceptRead more